Is it time to give up on International Women’s Day? Yesterday Melania Trump hosted an IWD lunch and Slate carried a story explaining that no, Trump wasn’t actually launching an escort service in China that same day but merely protecting his brand name. Even without that stuff, it’s struck me that IWD has become a marketing opportunity for any kind of culture or publishing event with the politics drained out of it. The Soviet Union’s promotion of it was always tokenistic and maybe there were only short periods in the last 100 years when it was genuinely radical. Still we can always look forwards to KFC advertising a cheap deal family bucket for IWD (‘Give mum the day off’) like they already do for Mother’s Day. And now for a genuine, worthwhile event that was part of the British Library’s programme for the week, as International Women’s Day has turned into at least an eight day festival.

On March 7 a panel of women who worked at Virago Press along with its founder Carmen Callil spoke about the history of Virago from the early 1970s onwards, what it still meant to them and to its readers, and what the Press is doing now. The chair was Claire Whalley whose documentary, Virago: Changing The World One Page At A Time was shown last year. They had lots of good stories. A couple of gems: when Lennie Goodings visited booksellers in Northern Ireland in the 1970s they told her ‘we can’t sell any of your books here because there are no feminists in Northern Ireland’. Carmen Callil had to get two men to guarantee her bank loan (the women who first worked at Virago put their own homes on the line to fund the business). When Virago ceased to be able to survive as a small independent there were furious rows about whether to let Bloomsbury or Little, Brown (a much larger American company) taken them over. Margaret Atwood’s comment on that saga was ‘the smaller the cheese, the more ferocious the mice’. They all agreed the rows had been ferocious, but about principles, because they all felt it mattered. Their differences with other second wave feminism publishers such as The Women’s Press were more about how they worked – they were less collective – than about what they published. Lennie said she was once asked accusingly if Virago was ‘the acceptable face of feminism’. Carmen shrugged off the suggestion that she and Marsha Rowe of Spare Rib both being Australian helped them work together originally (right at the beginning it might have become Spare Rib Press) since Marsha was from Sydney and she was from Melbourne – totally different worlds apparently.

Virago had already become part of Little, Brown by the time they published my book, Wasting Girls’ Time, but I had no idea about the rows. I only had dealings with the small Virago team and they were great. I especially loved the cover design they came up with. The artist Laura Knight’s image of a woman in the foreground looking away from a smoking disaster behind her in the kitchen was perfect and is still apt. Only last week I ruined yet another saucepan by forgetting all about it while I was out of the room at my desk. (The book’s now out of print but email me if you need a copy – the prices I’ve seen advertised online are mad.) 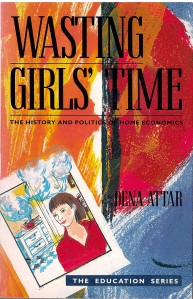 Virago stories, and giving up on International Women’s Day

2 thoughts on “Virago stories, and giving up on International Women’s Day”