‘The Russians were pioneers. They understood that social media could be manipulated long before other people did.’

In a recent interview, available as a podcast here, Anne Applebaum explained why fake news in the context of the US elections isn’t really news, because there’s no country in Europe that doesn’t have a similar story about it. Russia has been purposefully and systematically disseminating fake news memes for at least a couple of years.  It’s a long interview and you may not have time, but she gets on to how fake news is made to flow from about 36 minutes in. She makes a lot of important, and worrying, statements about the impact these disinformation campaigns have already had in Europe, for example in support of the far right in Hungary.  I’ve previously recommended Applebaum as an expert worth following and here I can’t do better than quote from the Sam Harris podcast. It adds a lot more substance to the fake news discussion I reported on in a previous post.

She warns that [in relation to the Trump campaign’s Russian links] the danger is that the FBI investigation won’t find a smoking gun and then people will say it’s all right. But we don’t need a smoking gun. We can see it.

It’s a pattern of politics that they [the Putin regime] follow…they seek out extreme groups and movements that they support sometimes quite openly…they support the far right in Hungary…sometimes it’s with money, sometimes contacts, social media campaigns…there’s a pattern to it, it works the same in every country. They adjust it depending on the politics. Sometimes they support the far left, sometimes the far right. Sometimes they support business people. But in every country they do the same thing…done deliberately…they create the themes then an enormous network of trolls and bots…repeated on dozens and dozens of conspiracy sites…not an accident…a deliberate tactic

look at what happens in other countries, then you can see that it’s a pattern…For Americans it’s new, it’s not new for Europeans…most of the time, Russian interference in foreign elections takes the same forms that it did in the United States. Russian websites operating openly (Russia Today, Sputnik) or under other names spin out false rumors and conspiracy theories; then trolls and bots, either Russian or domestic, systematically spread them.

In another article written late last year, Applebaum gives a few examples of Russian interference on behalf of Le Pen in the French elections, and also describes an experience of her own when she became a target .

it was eye-opening to watch the stories move through a well-oiled system, one that had been constructed for exactly this sort of purpose…WikiLeaks — out of the blue — tweeted one of the articles to its 4 million followers… As I watched the story move around the Web, I saw how the worlds of fake websites and fake news exist to reinforce one another and give falsehood credence. Many of the websites quoted not the original, dodgy source, but one another…many of their “followers” (maybe even most of them) are bots — bits of computer code that can be programmed to imitate human social media accounts and told to pass on particular stories 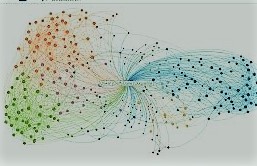 In a future post I’ll be looking at what’s being done in response and what’s recommended that we do ourselves so we don’t end up being fooled or worse, unwitting colluders.