Happy (late) Passover, Easter, and springtime. We are part way through the season for eating the bread of affliction, which is a good name for matzah if you have thrown out all your bread, flour and other baked goods and are eating factory-made sheets of unleavened bread (aka cardboard) for a week. Here’s what you’re missing.

Sourdough is the exact opposite of matzah, and that got me wondering what all today’s home sourdough bakers do for Passover, if they also happen to be observant. The rules say you have to get rid of all leaven, but leaven is precisely what your precious sourdough starter is. It’s one thing using up your bread, chucking away any flour or grain based products you happen to have, and of course any yeast, and surviving with only approved kosher for Passover alternatives for a week. It’s another if you have been nurturing your sourdough for months or years. Professional bakeries claim to have kept theirs going for decades.  Joel and I got ours started only three weeks ago and I’m not as attached to mine as people who take theirs out for walks (seriously – it’s to catch more wild yeasts) or give it a name. The Bread Ahead bakery supposedly calls theirs Bruce. Our tutor in the flatbread baking class scoffed at that and claimed he calls his cat ‘the cat’, so why bother naming the sourdough starter? I can see it’s an acknowledgement that the natural yeast you’re cultivating is alive, although it’s a plant rather than an animal and isn’t a single creature but consists of billions of cells. But the point is, sourdough bakers are going to find it hard to throw the whole lot out.

A little online investigation turned up two options, depending what people thought the point of the prohibition on leaven was all about. If you think it’s only commemorating the flight from Egypt and the Israelites not having time to let their bread rise, then it’s fair enough to ask a neighbour or friend to mind your sourdough starter for a week, and then get it back. As long as it’s not in your own home, you’re within the rules. On the other hand, if you think it’s to do with starting afresh and renewal – a reasonable view given all the fresh green stuff on the Seder plate, and the fact that it’s an agricultural spring festival associated with the barley harvest – you might decide that it’s important to get rid of your old sourdough and use the new grain to start again.

Leaving aside the Biblical story about not having time to make leavened bread, there could be other possible significance for singling it out for a temporary prohibition. The most interesting suggestions link to the history of bread baking, and the distinctions that might have been made in ancient Egypt between raised bread that was likely to have been more expensive and eaten by wealthier classes, and flatbread which might still have been leavened but didn’t take as long to make, eaten by poorer workers. Alternatively it could mark a symbolic distinction between Egypt’s settled, grain-growing culture and the culture of a more nomadic community. There was definitely good reason to see fancier breadmaking as an aspect of Egyptian culture, going back at least four thousand years. 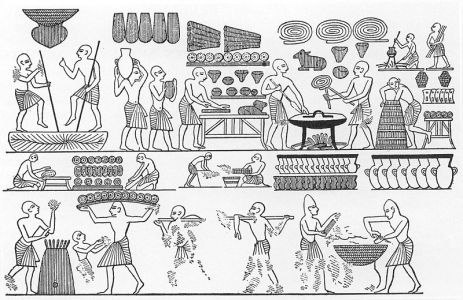 Originally matzah would have been much closer to other types of flatbread. The machine made boxed version is recent and not much of a guide. Of course, you can now get artisan matzahs and some home bakers are now making their own (unlikely to suit anyone very orthodox as the flour and the entire baking environment must all be guaranteed leaven free, the whole process must take no more than 18 minutes, and as yeast is in the air all around it isn’t generally practicable). I’ve seen recipes by and for people who are either less concerned or have really set up alternative artisan matzah production, and they make it sound fairly palatable with additions like olive oil and honey. Two top suggestions: bashing nails into a wooden rolling pin so you can roll out matzah with perforations to make it look like the boxed version (why? and where would you keep such an implement the rest of the year?) and using the matzah recipe to make alternative communion wafers, which apparently also need a reboot.

Elizabeth David’s book on bread and yeast cookery has a great facsimile of an 1896 poster for Squire’s Patent Balloon Yeast. Absolutely Pure, Never Done Rising. (You can actually blow up a balloon with yeast if you want to experiment with how it behaves.) Modern day baker’s yeast has only been factory-produced since the nineteenth  ccentury. Before that, bakers all used naturally occurring leaven, cultivated their own sourdough or used ale barm. I’ve been making bread using commercial yeast for many years and have made sourdough bread for only a couple of weeks, but I’m already struck by how much easier it is. That wasn’t what I was expecting. It’s also very different handling the bread dough. I caught a living metaphor in the wild last week (see here for more about living metaphors) when I found that I was literally getting the feel for it.